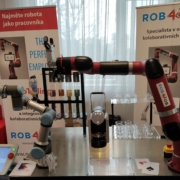 Our application, coffee brewing, caught the eye of a reporter from the Czech TV Nova. You can read the whole report on the link below. You can expect our own video from the event in the following weeks.

The prices of collaborative robots are usually set by the manufacturer for the rest of the world. The price of the robot itself, moving around 40 thousand Euro, is usually only a half of the full project price.

In the case of the investment cost being too high it’s always possible to finance the robotic workspace in the form of RoboTolling, meaning hiring the robot as a worker with an hourly fee of around 10 Euro for an hour of work.

Compared to industrial robots, the cobots have substantially less demand on space and security. In general if a cobot can do the operation then its use is preferable and cheaper.

If the cobot can’t manage the operation for one of the two following reasons: a) the required operation time is less than 20 seconds, b) the weight of the handled object is above 10 kg, then its more suitable to use an industrial robot. However here it is important to keep in mind that the price of the industrial robot is usually only the third of total project costs.